CNN has published an article about the transport systems by UST Inc.

The transport by Unitsky String Technologies, Inc. has become in focus of one of the world’s largest media.  On 8th of July, CNN published an article about the transport systems by UST, Inc. Oleg Zaretsky, CEO of the company  managing the innovative center of string transport technology in Sharjah and representing the developer's interests in MENA-region, told the journalists about this unique project. Read more via the link on CNN.

These futuristic pods could help cities solve their traffic problems

Abu Dhabi (CNN Business) – Traffic congestion is a problem for cities around the world, with some looking to electric scooters to ease gridlock, and others to AI-enabled traffic lights. But one company believes the solution is to build a network of driverless high-speed pods that ride around cities suspended from a steel track.

In June, Belarus-based uSky Transport opened a 400-meter test line in Sharjah, which borders Dubai in the United Arab Emirates.

From the outside, the electrically powered pods are glossy white while the interiors are designed to feel like a first-class airline suite, including mood lighting, lounge music and floor-to-ceiling windows. With two padded armchairs and two foldable seats, the vehicle being tested can carry up to four passengers.

A fully implemented city-wide network could support 10,000 passengers per hour, uSky says, with vehicles currently able to travel up to 150 kilometers (93 miles) per hour — although for safety reasons, they can't reach their top speed on the test track.

The company says its objective is to free up roads and ground space that could be used for greenery, walkways and public leisure spaces. "The ground level is completely over-saturated, and people are tired of traffic jams. People are tired of emissions," says Oleg Zaretskiy, uSky Transport's CEO.

According to uSky, while one kilometer of subway can cost up to $150 million to construct, this system costs around $10 million. And by using less structural materials, it reduces carbon emissions.

The company has also developed a similar technology to transport cargo containers, carrying up to 48 tons at a top speed of 90 kilometers (56 miles) per hour.

Making a difference in mobility

"In a cable car, you have one car and it always drives at the same speed," she says. "[In sky pods] you can use many different cabins on that particular infrastructure," such as ones tailored for shorter trips in urban areas or for longer distances.

Although she cautions that it would require careful planning to avoid congestion in a busy city-wide network, Haag believes it could still be a widely adopted solution if the promises of improved mobility and sustainability are kept. 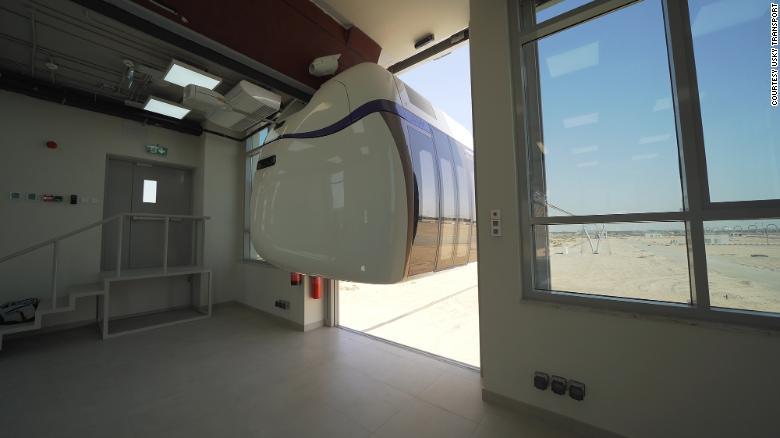 Later this year, uSky plans to build a 2.4 kilometer (1.5 mile) line in Sharjah, allowing it to run the passenger pod at higher speeds and demonstrate how passenger and cargo pods can be integrated into the same network.

According to Hussain Al Mahmoudi, CEO of Sharjah Research Technology and Innovation Park, where uSky's test lines are located, the hope is for sky pods to boost the emirate's strategy of becoming a sustainable, futuristic hub.

With the test line up and running, uSky has also received initial approval to build a line around the coastal town of Khor Fakkan, to the east of the emirate.

Neighboring emirate Dubai is also exploring driverless pods that would operate above city traffic and other global companies, such as Virgin Hyperloop, are reportedly developing high-tech transport pods for the region. 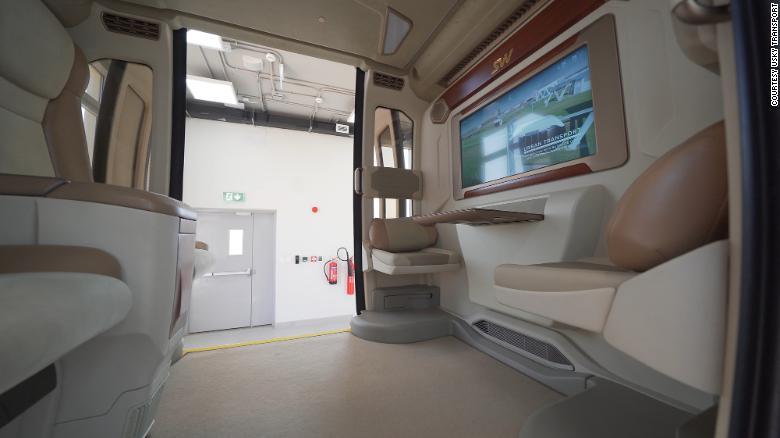 Zaretskiy says uSky is also looking beyond the UAE. "We can see that the most promising areas for us [are in the] Middle East [and] Asia -- places where there is natural growth of population ... such as India and Pakistan," he says.

Haag adds that pods are more suited to countries where public transportation is under-developed and there is increasing demand for mobility solutions. Still, Zaretskiy says uSky Transport has received inquiries from countries including the United States and Canada.

The company hopes to finalize its first commercial contract by the end of the year in Sharjah, Zaretskiy adds, meaning uSky pods could be up and running over traffic by 2024.