Return to the roots. The Belarusian engineering company Unitsky String Technologies Inc. has declared the completion of the rebranding

The Belarusian engineering company Unitsky String Technologies Inc. (UST Inc.) has declared the completion of the rebranding, which began in 2020. Its main reasons are a new stage in the development of string technologies and the company's entry into the world market, as well as a return to terminological and technological origins. The new brand of the company in English – Unitsky String Technologies Inc. (until 2020 – SkyWay Technologies Co.) – combines both the name of the technology with which it all began and the surname of its author.

Unitsky String Technologies Inc. is an engineering company engaged in the design, development, production, testing, certification and maintenance of fundamentally new, physically perfect transport and infrastructure complexes in overpass design. Their creation is based on the invention by Anatoli Unitsky – a string rail. String-rail transport and infrastructure complexes developed by Unitsky String Technologies Inc. in 2021 were certified in the UAE in accordance with international standards. They are characterized by high efficiency, safety, reliability and durability.

In 2020, Unitsky String Technologies Inc. completed the main part of research and development work on the creation of urban passenger transport and infrastructure complexes with all elements:

Thus, the company had at its disposal the first market product ready for mass implementation. In 2021, this was confirmed by the certification of the complex and its key elements for compliance with safety requirements conducted by TUV SW (Certification & Standardization) at the uSky Innovation Center in the UAE (Sharjah). The company's transition from the "start-up" stage to the "business" stage took place. Actually beginning the rebranding process, which started at the end of 2019 and was phased out over two years – from 2020 to 2021, was initially related to this company’s development stage.

"The brand change is largely related to the output of the string transport developer company to a new stage of development, when it had a full-fledged market product in the field of mobility at its disposal. Prior to that, the company had been at the stage of a venture project for several years, which was the main reason for bringing the SkyWay investment brand to the forefront," commented the rebranding General designer and founder of Unitsky String Technologies Inc. Anatoli Unitsky.

The main part of the investment that went to the development of the engineering company Unitsky String Technologies Inc., including demonstration and certification centers with test tracks in Belarus and the UAE, scientific and technological laboratories and production workshops, was attracted under the crowdinvesting scheme. The investment was carried out through foreign fund companies independent of the developer company and not affiliated with it, networks of business-angels and enthusiasts who worked within the framework of partner programs offered by fund companies. Such a financing model has demonstrated a high level of efficiency and allowed for a short period of time to pass a long way of technological development and create a highly intelligent market product. According to Anatoli Unitsky, this is a rare product that engineers and scientists create about once a century: "It is complex, infrastructural, industry-leading, covering many related fields of knowledge, from logistics and transport to energy engineering and communications."

However, crowdinvesting has also led to some side effects due to the fact that in many countries there is no clear legislative framework for it. It is regarded there as an investment mechanism with increased risks. In this regard, the financial regulators of some countries have issued warnings about the possible danger of investing in a number of fund companies that used the term and brand SkyWay in the name (First SkyWay Invest Group Limited, Skyway Capital Ltd, Sky Way Invest Group). And, although such a warning does not indicate the dishonesty of the actions of the mentioned companies, it cast a shadow on the SkyWay brand, and also affected the interests of the developer of string transport – Unitsky String Technologies Inc. After all, the company also used the SkyWay term in its advertising materials and in the company's name in English until 2020 (this term was absent in the name in Russian).

Having rebranded, Unitsky String Technologies Inc. emphasized its legal, financial and operational isolation from ever existing or existing fund companies. The logo, the translation of the company's name from Russian into English and the elements of the corporate identity were changed. The new logo of Unitsky String Technologies Inc. consists of two parts: a brand name and a unique graphic spelling of the company's name. The sign consists of two parts – the letter "U", which is the first letter of the surname of the General designer and author of string technologies (in English), and the outlines of the first electric rail car created in the company and received the international name Unibike U4-621. 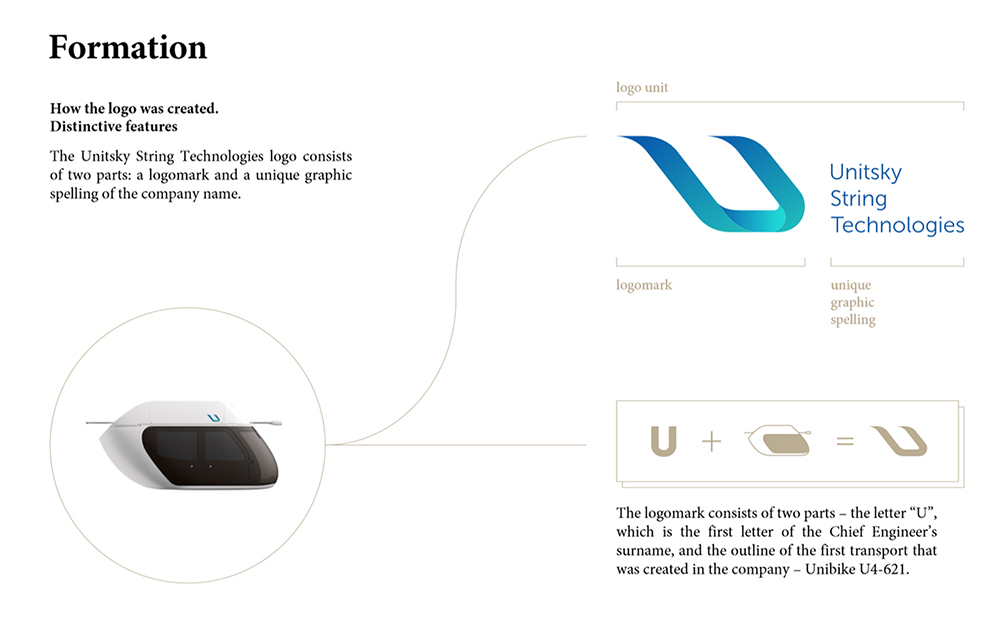 The transition from the "start-up" stage to the "business" stage and the associated rejection of the investment brand was marked by a return to the technological brand, which has historical significance and refers to the surname of the author of string transport. Moreover, this is a step towards the unification of naming in Russian and English versions. The new name of the group of companies should exclude the possibility of matching or confusing third-party companies with the activities of the engineering company Unitsky String Technologies Inc. created in Belarus.