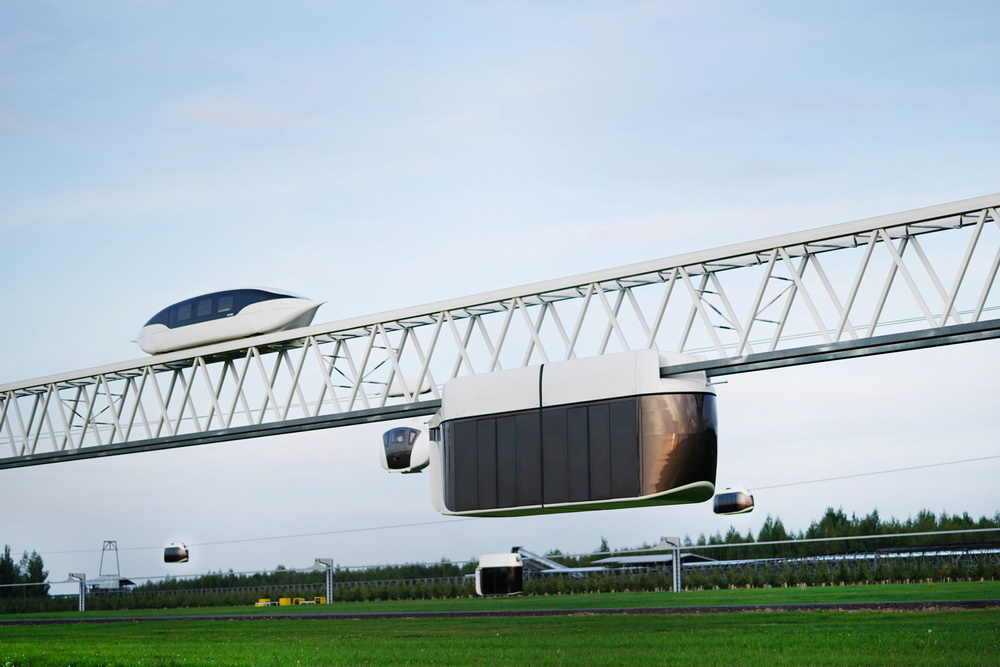 The North American media outlet Clean Technica described the energy-efficient transport complexes of Unitsky String Technologies Inc. (UST), which are not only more environmentally friendly than Tesla's electric car, but also save cities from traffic jams and accidents. Read the original here.

Traffic congestion is a significant issue in urban areas in the United States and around the world. Public health impacts of congestion and idling were identified as early as 2010 to be significant in magnitude. That’s because carbon monoxide, nitrogen oxides, and hydrocarbons are released when fuel burns in an internal combustion engine (ICE). Gasoline vapors escape into the atmosphere during refueling and when fuel vaporizes from engines and fuel systems caused by vehicle operation or hot weather. This evidence points to a causal role for traffic-related air pollution on mortality, particularly from cardiovascular events.

Electric cars pollute far less than their ICE counterparts, as they don’t emit tailpipe pollution of any kind — smog-forming or climate change-creating. But the Union of Concerned Scientists reminds us that, given that EVs are charged by electricity, they are indirectly responsible for the pollution from the source of that electricity, as well as the emissions from producing whatever fuels those power plants burn.

But a new vehicle entering the marketplace may be resolving some of the problems of modern transportation of both ICE and electric cars. With fast, safe, and accessible second level transport, the uPod has the potential to make traffic congestion, pollution, and accidents much less common.

Unitsky String Technologies Inc. created electric vehicles on steel wheels that move on string rails. The vehicles on the rails perform at varying capacities and can speed up to 150 km/h. The noise and vibration from their string transport is lower than from railways, trams, and monorails. The UST model range comprises a variety of passenger and cargo electric vehicles.

String transport has advantages over other EVs.

● The energy consumption of uPods is two-three times lower than in existing transport systems, as they use steel wheels.

●  The transport complex by UST is affordable and easily integrated into existing infrastructure, as it requires minimum land allocation for construction.

Over the last decade, Tesla has developed an eco-friendly car, but UST argues that there can be more interesting vehicles in terms of ecological safety. Considering all of Tesla’s advantages, UST points out that Tesla does not solve all long-standing transportation problems.

● How can road accidents be eliminated?

● How can the problem of traffic jams be solved?

● How can we use less energy?

● How can harmful emissions to the atmosphere caused by rubber tire wear or their manufacturing be excluded?

Unitsky String Technologies Inc. provides answers to these questions. They have initiated manufacturing processes that address these challenges through their automated electric vehicles on steel wheels.

What’s the difference between the uPod and other EVs?

●  UST reminds us that, while conventional electric cars are environmentally friendly, they still occupy a place on the road leading to traffic jams with fuel-powered cars. String transport eliminates this problem because it moves on a special above-ground highway.

●  Rubber tires used in EVs, as well as asphalt, are eventually worn away and release harmful substances into the air. Tire and asphalt production also pollutes the atmosphere, while the Unitsky String Technologies Inc. transport uses steel wheels.

●  Other EVs are still subject to accidents. With string transport, accidents are ruled out. The track structure is located above the ground and does not intersect with other roads, providing an unprecedented security level.

●  Above-ground roads are also important because surface level environments and underground hydrology may be left untouched.

●  The uPod is driven by artificial intelligence, which responds instantly to the smallest changes in traffic situations.