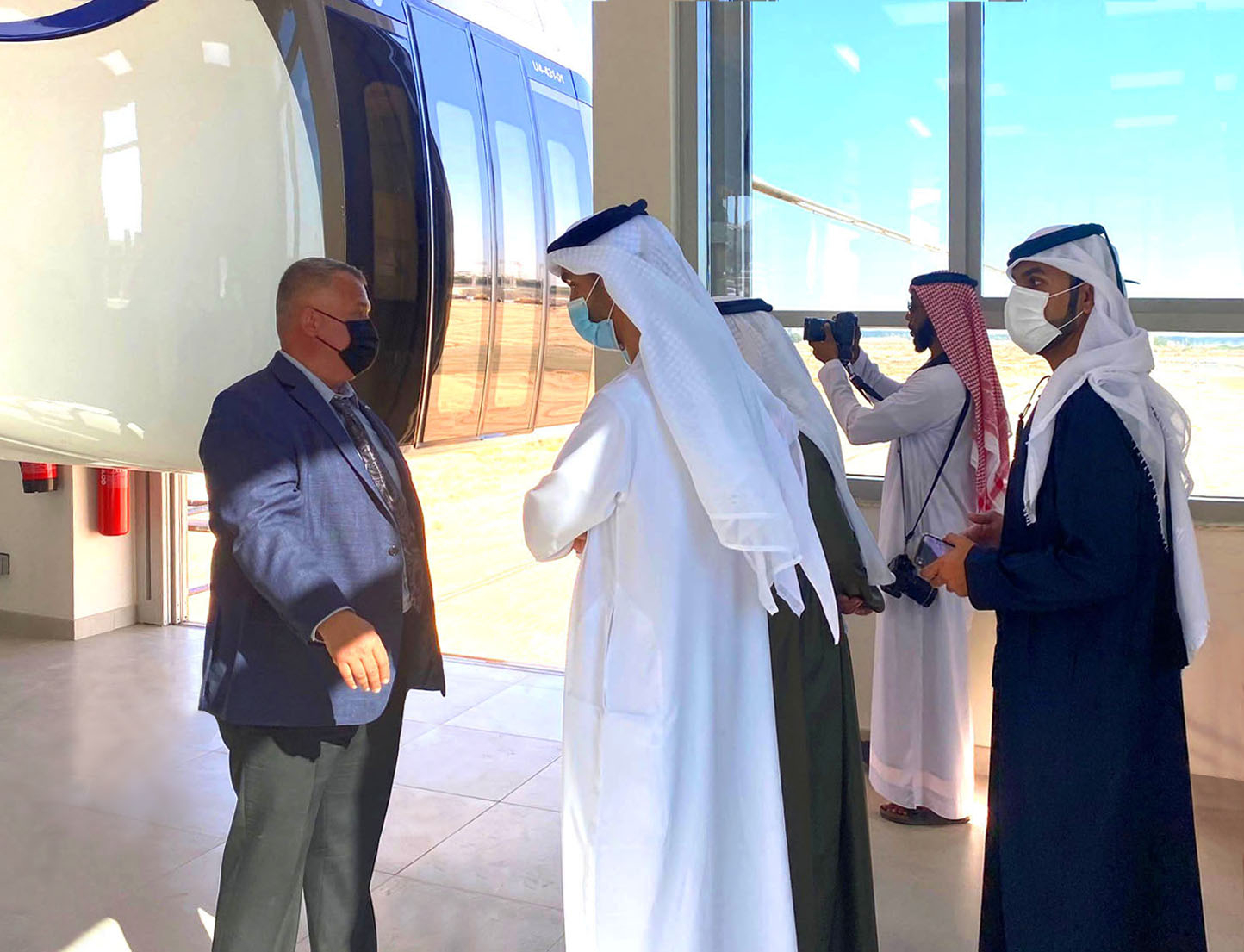 UST, Inc.'s R&D Center at Sharjah Research Technology and Innovation Park (SRTIP) was visited by official delegates from the UAE government as well as Saudi Arabian businessmen to announce plans to build an innovative transportation system in 2021; "the Line" will be part of NEOM Linear City Project.

The Saudi businessmen’s delegation was led by Dr. John Fahd Touma, Director of ERI, one of the country's largest civil engineering companies.

Both delegations were hosted by Mr. Hussain Al Mahmoudi, Director for Innovations of Sharjah Emirate, and Head of SRTIP and the American University of Sharjah Enterprises.

The visitors appraised the Unicar® luxury electric passenger pod and the above-ground transport complex built in December 2020 for certification of three Company'sCompany's transportation solutions in the MENA region:

The passenger above-ground transportation system, which provids passenger traffic of 50,000 people per hour on each elevated overpass with a price of $0.1 per pass.-km at speeds of up to 150 km/h. The Company's technologies reduce the cost of construction and operation of the transport system by more than a third than a standard monorail, by half compared to a railroad, and by five times compared to a highway.

The cargo above-ground transportation system provides cargo flow of standard freight containers with a price of $0.01 per t-km at speeds of up to 130 km/h. The competitive advantage of the Company's solution is the loading and unloading operations in ports and logistics hubs that occur "on-the-go" without the construction of additional stations.

And finally, the above-ground high-speed passenger transportation system, which reaches speeds of 300-500 km/h. The engineering design feature of the structure itself and the high-speed route transfer to the second level allows quick transporttation without compromising passenger comfort and economic feasibility.

On January 10, 2021, His Highness Crown Prince of Saudi Arabia Mohammed bin Salman Al Saud announced in Riyadh the launch of the ambitious project "the Line" in the future's NEOM city.

"We (Saudi Arabia — author's note) are to transform traditional cities into cities of such technological type (linear cities — author's note), cities of the future. Today, as Head of the NEOM Board of Directors, I present to you — the Line. It is a city with a population of 1 mln people, 170 km long, with 95% of nature untouched within its borders; a city without cars, traffic jams, exhausts and industrial pollutions." — His Highness Crown Prince of Saudi Arabia Mohammed bin Salman Al Saud.

Unitsky String Technologies, Inc. is engaged in the design and development of above-ground electric transportation systems. These systems are ideal solutions for the transportation infrastructure organization in linear cities and similar urban projects.